Welcome to St. John the Baptist Orthodox Church. We are a parish of the American Carpatho-Russian Diocese in the USA. Our bishop is, His Eminence, Metropolitan Gregory of Nysaa. Our diocese is under the Ecumenical Patriarchate of Constantinople.

Founded in 1919, our parish is celebrating its 100th Anniversary this year.

We are a friendly and welcoming community of believers who worship our Lord, Jesus Christ, united in the Holy Spirit, to the glory of God the Father.

We are a sacramental community centered on the Holy Eucharist.

We are a praying community, for each other and for the world.

We are a fellowship community, enjoying each other's company in Christian love and work.

We are a life-long learning community knowing that we can discover more, every day about our life in Christ.

We are a multi-ethnic, multi-racial parish welcoming everyone seeking the fullness of the Christian Faith.

We are a sacrifical giving community, offering our gifts of time, talent and treasure for the building up of the Body of Christ here in East Pittsburgh, our diocese and the Orthodox world.

We are a giving parish to others in need by collecting funds and other gifts regularly so that we can help the least of the brethren in our area.

You are invited and most welcome to be part of our community of faith. Come and see!

Thou art a priest forever, according to the order of Melchizedek

Father John Gido, 93, was born in Erie, Pennsylvania on July 12, 1928, and passed to eternal life on November 25, 2021.  Preceding him in death was his beloved wife of 50 years Pani Pauline Kesselak Gido, parents, John E. and Mary A Magdinec Gido, and parents-in-law Andrew and Kathryn Kohan Kesselak, Senior. Surviving is his son John, daughter-in-law Tammy, grandchildren Jacob and Sarah, and daughter Mary, sister-in-law Catherine and husband Nick Timko, in addition to numerous cousins, nieces, nephews, and great nieces and nephews.

Father John received his elementary and secondary education in the Erie County Public schools, graduating from Erie East High School in 1946. He attended Gannon University in Erie, Pennsylvania, Holy Trinity Orthodox Seminary in Jordanville, New York and attended Christ the Savior Seminary in Johnstown, Pennsylvania, becoming a member of its first class of seminarians.  Upon graduation, he married the former Pauline Kesselak of Johnstown, Pennsylvania on September 25, 1954.

Father John was the first seminarian to be ordained by the late Metropolitan Orestes, of thrice-blessed memory, in the newly consecrated Christ the Savior Cathedral in Johnstown on October 3, 1954.  His first pastorate was St. John the Baptist Church in Hawk Run, Pennsylvania, where he served for six and a half years.  During his pastorate, ground was blessed for the site of a new church and cemetery, and in 1960, Metropolitan Orestes, consecrated a beautiful new church for the parish.  During this time, he also served as chaplain at Pennsylvania State College University.

Father John and his family came to St. John the Baptist Church in Ambridge, Pennsylvania and he served his first Divine Liturgy on August 7, 1960.  He retired after 54 years of service in 2006. After retiring from his parish, he continued to serve as a substitute priest for another 10 years for the orthodox churches of Allegheny County, Beaver County, and the surrounding area. Most recently, Father John celebrated his 67th year ordination anniversary on Oct 3rd, 2021.

During his pastorate, Father John served as the Orthodox chaplain at Dixmont State Hospital in Glenfield, Pennsylvania for over 20 years; he served as dean of the Pittsburgh Deanery from 1988 to 2006; he was a member of the Executive Council of the Brotherhood of Orthodox Clergy of the Greater Pittsburgh Area; he was a member, and past officer, of the Ambridge Interfaith Clergy Association; he was the chairman of the Annual Distinguished Diocesan Doner’s Appreciation dinner for the Host, Metropolitan Nicholas which benefited Camp Nazareth in Mercer, PA; he was the chairman of the Annual American Carpatho-Russian Day; he was the chairman of the Annual St. Nicholas charity dinner which raised funds for the diocesan seminary; he was the chairman of the Annual St. Nicholas Charity Dinner of St John’s Parish to help parishes or organizations in need; he has served as Master of Ceremonies for diocesan celebrations at Christ the Savior Cathedral and Seminary in Johnstown, and the Consecration of Cyril and Methodius Church at the Diocesan Youth Camp and Retreat Center in Mercer, PA; he attend the canonization ceremonies for Father Alexis Toth, leader of our people in America, at Saint Tikhon Monastery where he had the honor of carrying the casket containing his bodily remains; he accompanied Metropolitan Nicholas to Constantinople to attend the 150th Anniversary of the Ecumenical Patriarch’s Seminary on the Island of Halki; he accompanied Metropolitan Nicholas to  Gorlice in Poland for the Canonization ceremonies for Saint Maxym Sandovych, who was martyred for his love and dedication to the Orthodox Church and faithful; a new parish center and rectory were constructed in Ambridge, and the mortgages on the new church, rectory and parish center were eliminated under Father John’s pastorate; he taught the children of Ambridge several Christmas plays, creating the costumes and scenery with the help of Pani Pauline; he also taught carolers and organized the “Koladniky” annually, visiting the homes of parishioners during the Christmas season; he and Pani Pauline served as the “altar society”  laundering and dressing the altar during the liturgical year; he and Pani Pauline also served as hosts for the Pittsburgh Council of International visitors for a number of years, as well as serving as hosts for many foreign visitors of our diocese, and serving as translators.

Father John was an avid gardener and while in Ambridge took care of the parish landscaping.  He then transferred those gardening skills to the home of his daughter where he lived after retiring and excelled at flower arranging and decorating. He enjoyed visiting various outdoor gardens and conservatories. He volunteered as the archivist at The Captain William Vicary Mansion in Freedom Pennsylvania feeding his love of history. He enjoyed art and architecture and enjoyed visiting museums, historic buildings and living history museums.  He played violin and loved music, especially choirs and liturgical hymns, as well as classical music, musicals and opera and loved to sing. He also loved books and read voraciously.  He also was an amateur actor and loved the role he played in Fiddler on the Roof the best.

Father John had a true vocation from the time he was a child. He was dedicated to his faith and his church, loved his fellow priests, his parish members, and his family, and was dedicated to them during his lifetime.  Please remember him in your prayers. Friends will be received Monday November 29, 2021, from 3:00pm until time of Funeral Service for a priest at 7:00pm, at St. John The Baptist Church, 450 Glenwood Drive, Ambridge, PA. A Liturgy will be held Tuesday November 30,2021 at 10:00am. Komashna immediately following at the Parish Center. Interment will follow at St. Nicholas Cemetery, Erie, PA. As we continue to be guided by the CDC through the COVID - 19 pandemic, we are now at the stage of voluntary masking indoors. It is the consensus of the parish council that we can now make mask wearing voluntary at church services, Fellowship Hour and other church activities. We are mindful that some would still feel more comfortable continuing to wear their masks. Also, for those who have not yet been able to be vaccinated, the parish council thinks that wearing a mask should continue.
As of June 1, 2021, the following will take effect:

Mask wearing will be voluntary.
Individuals may continue to wear a mask if preferred, whatever the reason.
Per current CDC guidance, if you are not fully vaccinated, you are strongly encouraged to keep taking all precautions, including wearing a face mask and social distancing.

Have You Been Fully Vaccinated?
In general, people are considered fully vaccinated:
2 weeks after their second dose in a 2-dose series, such as the Pfizer or Moderna vaccines, or
2 weeks after a single-dose vaccine, such as Johnson & Johnson’s Janssen vaccine

THERE ARE NO RESTRICTIONS ON CHURCH ATTENDANCE

MASKS ARE STILL REQUIRED, BUT THERE ARE NO LONGER TWO WORSHIP GROUPS.

Reception into the Catechumenate!

On Sunday, February 27th Thomas Cunningham was received as a Catechumen as he prepared to be received into the Orthodox Church on Holy Saturday.

THIS WEEK AT ST. JOHN'S

Daily Readings and Lives of Saints

Daily Readings and Lives of Saints 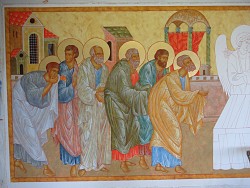 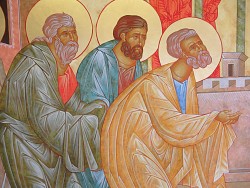 THANKS TO OUR PARISH PTA AND SEAN NELIS FOR THEIR DONATIONS..........

The materials are produced by Orthodoxjourneys. Weekly study units will be used covering a 45 week program.

Given the uncertaintly caused by the pandemic, our new materials can be used for in-person, home-study, or on-line presentation. This flexibility will help us do the best we can under the present circumstances.

If you have any questions, please feel free to contact Fr. Joseph.

Many thanks to Anna Margaret Costas for her generous donation of the icons of the 4 Evangelists, Matthew, Mark, Luke and John which now grace the Royal Doors. May they be a fitting remembrance for her family's loved ones.

During these days of self-isolation due to the COVID-19 pandemic, there are opportunities for us to follow the daily services of the Church, especially during Great Lent since communal gatherings in the State of Pennsylvania are being limited to 10 or less.

One site AGES has a complete listing of all daily services. Although the daily Menion is based on the New Calendar, that is a minor issue when the site has so much too offer.

If you would like to take the time during these days of self-isolation so we can all do our part to "flatten the curve" of the outbreak, I encourage all of you to take advange of the AGES Digital Chant Stand.

Lives of the Saints of Carpatho-Rus

The ACROD website has a presentation on the lives of the Saints of Carptho-Rus.  Follow the link below to read about their lives.

Our Continuing Christian Education classes will resume on September 18 at 7pm. We will study Evening Worship in the Orthodox Church. Bring a friend.

The Rite of Forgiveness is one of the most important and powerful acts we can do as we begin our journey to Pascha during the Great Fast.

The Canon of St Andrew of Crete will be offered Monday-Thursday at 7pm. This coming Friday at 7pm the Liturgy of the Presanctified Gifts will be celebrated.

Arrange your schedules to participate in as many services during the first week of Lent as possible.

We made pirohi for our Lenten food sale.

Here are some pictures that can tell the story of the month!

On Sunday, February 17th, our Pittsburgh Deanery Dean, Father Robert Prepelka visited St. John's and concelebrated the Divine Liturgy with Father Joseph. Father Robert also led the Panahida for the repose of the soul of founding hierarch of the ACROD, Metropolitan Orestes (Chornok) +1977. May His Memory Be Eternal!

In our efforts to reach out to those searching for the Orthodox Church and Faith, we have started a new Facebook page. If you have Facebook, please go to stjohneastpitt and "Like" and follow our page. Also, please share the page with your Facebook friends, so they can share it with their friends. That is how we can literally reach thousands of people.